~nty one years ago was a world that many
young people never k~ew or could comprehend.
No openly gay person had been elected
to public office in Oklahoma. Organizations
advocating equality for GLBT Oklahomans
were few and far less influential. Only 3 years
earlier our Oklahoma Legislature had passed
legislation (later ruled unconstitutional by the
Federal court system) that would prohibit a
public school teacher from even making a positive
statement about the GLBT community
in a classroom. Equality for GLBT people was
hardly discussed, and gay marriage even more
remote. Politicians could (and did) make hateful
statements about our community without
any fear that someone would challenge their
remarks. (sorry Sally, you came along too late)
ride
~ganizers of this year’s Tulsa Pride Celebration
are promising the public that this
year’s events will be anything but boring. Nate
Black, one of the co-chairs says the changes
are intended to breathe a new sense of excitement
into the Pride observance and to help
promote the revitalization of downtown. It
may not look the same, but organizers promise
that Tulsa Pride 2008 will be just as incredible
of a celebration as ever. Spanning over two
weeks, with an event almost every evening,
Tulsa Pride 2008 has something for everyone.
"There will be some differences, but the spirit
of the celebration is the same. It is still going
to be a joyful, invigorating experience that xvill
spark the same sense of pride and freedom in
our community,"
Tutso PI IDE ?008

2 the STAR www.ozarksstar.com
walk or drag yourselfto Tulsa
Pride 2008
By Joey De
It may not look the same, but organizers promise that Tulsa Pride
2008 is a series of events you won’t want to miss. "We have our
three anchor events: the gala, the parade and block party, and the
picnic," explains Pride co-chair Nate Black. "There ~vill be some
differences from the past, but the spirit ofTulsa Pride is as vibrant as
ever."
Here is a brief look at the events ofTulsa Pride 2008. For a complete
listing, maps and details, visit www.tulsapride.org
May 30 - "Sisters in Song" concert at All Souls Unitarian Church.
May 31- Wear your rainbow attire and enjoy a day at America’s favorite
zoo with your friends and family. Tnat night, join the Equality
Gala and celebrate the GLBT community at Cain’s Ballroom.
Jun. 1 - Rev. Barney McLaughlin and members ofTulsa’s faith community
will be hosting "Spiritual Equality," an interfaith service at
Bethany Christian Church.
Jun. 2 - Join PFLAG at the Circle Cinema for a free screening of
"Anyone and Everyone," a film about families struggling to accept
their GLBT youth.
Jun. 4 - Cheer the Drillers to victory and enjoy an old-fashioned
ballpark picnic. Tickets must be bought in advance. That evening,
Lochran Theatre’s "He&vig and the Angry Inch," opens. The show
will play at various locations through the 15th.
Jun. 5 - Enjoy the works of 60 artists at "More Color," a one-night
ex~hibition at the Equality Center.
Jun. 6 - Open Arms Youth Project Fashion Show.
Jun. 7 - Dine at the OkEq Family Taco Dinner benefiting PFLAG,
then join the Pride Parade and Block Party, with two stages of entertainment.
Youth Services ofTulsa will be hosting a concert in their
Coffee House for those under 21 and child care will be available for
those under 12 at the Equality Center.
Jun. 8 - Texas Hold’era at the Equality Center.
Jun. 10 - Leather and Fetish fashion show at the Equality Center.
Jun. 11 - Join the "Gender Avengers" for an evening of monologues
and plays addressing transgender issues.
Jun. 12 - Learn about raising kids in a diverse world at the Downtown
Library. Speakers will be available and books attacked for their
"inappropriate" messages will be displayed.
Jun. 13 - Screen "The ~A’ Word," a film with no audio or subtitles,
about 10 deaf lesbians.
Jun. 14 - Walce up early for the YST fun run before the Equality
Festival at Centennial Park on 6th and Peoria!
www.ozarksstar.corn the STAR 3

We oppose the portrayal of homosexual or
promiscuous behavior in a positive light in
our public schools.
We oppose the erosion of our military
readiness through openly practicing
hornosexuals serving in the military
We oppose the promotion of homosexuality,
the elimination of laws against sodomy,
and the granting of minority protection or
special status to any person based upon
sexua~ preference or llfestyb choice.
We are committed to equal treatment
of all service members and believe all
patriotic Americans should be allowed
to serve our country without
discrimination, persecution or violence.
We support legislation barring workplace
discrimination based on sexual orientation.
We support the full inclusion of gay and
lesbian families in the life of our nation
and seek equal responsibilities, benefits
and protections for these families.
Taken from current platforms of the Republican and Democratic parties of Oklahoma. 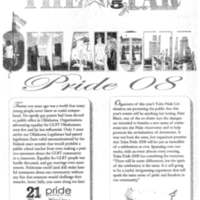