By Joey De
2008
A new "
for Pride
By Joey De
Ifyou have lived in Tulsa for more
than twenty minutes, you knmv that
there is an impenetrable force-field
separating the city. Most Tulsans call it
Forty-First Street.
Photo: Equality Festival at Tulsa’s New Centennial Park
Sometimes change can be difficult,
however, despite months of complaints
and apocalyptic predictions about the
many "firsts" at Tulsa Pride 2008, it seems
that the only people who had difficulties
were the protesters. For the first time in
the celebration’s history, the protesters
were present for only a minimal time
during the Pride Parade and completely
absent from the Diversity picnic.
"2008 was a },ear of dramatic change,"
says Nate Black, one of the event’s cochairs.
"However thanks to the dedication
of a strong group of volunteers, all the
changes to this year’s events were possible.
It would not have been possible without
each and every person who helped."
Black especially credited his co-chairs
Kristi Freeman and Toby Jenkins with
making the pieces fit together. "Kristi has
an incredible ability to assess and foresee
needs and coordinate logistics. The fact
that everything worked smoothly to host
thousands of people at our events xvas a
testament to her abilities."
"The fact that ~hlsa Pride is able
to remain free to the public is proof of
Toby’s dedication to these events, which
on the low end cost over $30,000. Under
his leadership, we were able to, for the
first time, secure the majority of our
sponsorships long before the events even
took place," says Black.
.......... Continued page-5
Enter the Downtown Plaza Hotel, on
7th & Boulder, who for the first time in
recent memory provided Tulsa Pride an
official "host" hotel.
Staying at a hotel room for your own
city’s Pride ,nay seem a little excessive, but
for a South-Tulsan, it made perfect sense.
Having a place downtown to call "home"
for the weekend saved time and even
money on the celebration’s two largest
weekends.
Anyone who has ever been to a Pride
observance knows that three things are
true. It will be hot. You will be sweaty.
You xvill be drinking. All three of those
can combine to impede a "proper" Pride
celebration, but with the convenience of
the Downtown Plaza Hotel’s location,
neither was an issue.
Through taking advantage of the
special Pride Rate offered by the hotel, it
was effortless to enjoy the day (or early
evenings) festivities,
..........Continued page-5

We believe that homosexuality is not a
genetic trait but a chosen lifestyle.
We oppose the portrayal of homosexual or
promiscuous behavior in a positive light in
our public schools.
We oppose the erosion of our military
readiness through openly_ practicing
homosexuals serving in the military
We oppose the promotion of homosexuality,
the elimination of laws against sodomy,
and the granting of minority protection or
special status to any person based upon
sexual preference or lifestyle choice.
If the Republican message of hate and division
doesn’t represent you, then join us and vote
Democrati’c in support of what we stand for:
LIBERTY, EQUALITY AND JUSTICE FOR ALL,
PROUDLY INCLUDING THE GLBT COMMUNITY.
I~’ol~V~ln ~o~e$~ Oklahoma Democratic Party Chair
I~ Asbe~’ry~ Oklahoma Democratic Party Vice Chair
Undu Sru~’ ~’~ Oklahoma State Democratic Party
Treasurer
¢~’~o g~’d~ Oklahoma State Field Director Democratic
National Commiffee, Fifth District Chair
3~ ~o~’~ Oklahoma Corporation Commissioner
A~ ~{~’e~ Oklahoma State Representative District 88
gob ~.e~o~ our friend who’s straight but not narrow
Taken from current platforms of the Republican and Democratic parties of Oklahoma. 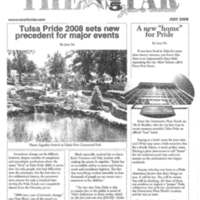