ESTABLISHED 2003 www.ozarksstar.com MAY 2008
One of the longest running and largest of Gay Rodeo Organizations in the International
Gay Rodeo Association (IGRA) system, Oklahoma’s Great Plains Rodeo will kick off it’s
23rd year. A fun filled weekend May 23 through May 25th 2008. The event will be held in
Oklahoma City at State Fair Park, 333 Gordon Cooper Blvd.
OKLAHOMA CITY, OK ~The fun begins
with the Great Plains Rodeo Kickoff Party
hosted at the Finishline Thursday, May 22
featuring the current reigning OGRA Royalty.
This is a great chance to meet and greet,
dance and party, and ready yourself for the
weekend to come.
The host hotel for the Rodeo is the Hilton
Garden Inn, and there is a block of rooms
available at a special rate from May 22-26
that will be available until May 16 or until
they sell out, whichever comes first. Registration
for the event happens Friday from 6
p.m. until 9 p.m. Tickets are available from
OGRA members for $10 or $15 at the gate.
The Rodeo takes place at the Oklahoma
State Fairgrounds on Saturday May 24 and
Sunday May 25, beginning at 8 a.m. both
days. To keep the weekend wild the Texas
Gay Rodeo Association will host their Texas
T Party on that Saturday in the Copa from
6 p.m. until 9 p.m. featuring fantastic food
and fun.
The Oklahoma Gay Rodeo Association,
Inc. (OGRA) is a nonprofit organization
and member of the International Gay
Rodeo Association, Inc. (IGRA) which is
comprised of 28 state/provincial associations
throughout the United States and Canada.
OGRA is proud to be the first association
seated at the first ever IGRA Convention in
1985 For more information check out the
OGRA website at www.ogra.net.
An Exclusive Interview
With OGRA’s 4 Term
President, Klint Wieden
Photo: Klint Wieden with his horse
Cherokee. "I grew up in the small northwest
Oklahoma town ofArnett. I rode horses and
worked cattle my whole life, so that’s really
who I am." Klint told the Star. PAGE-12
Newly revamped
drag-free Tulsa
Pride 2008
unveiled
By Joey De
TULSA, OK __ Organizers of this year’s
Tulsa Pride Celebration are promising the
public that this year’s events will be anything
but boring. "We have made a lot of
changes to the entire celebration," says Nate
Black, one of the co-chairs. Black says the
changes are intended to breathe a new sense
of excitement into the pride observance
and to help promote the revitalization of
downtown.
"People don’t kno,v downtown. They
don’t know how to get here, they don’t
know where to park, they don’t know how
many things are down here and growing,"
Black says. "We have moved the events to
................ Continued Page 5 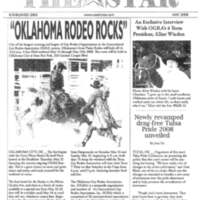