This issue of the STAR marks a milestone not only for
our magazine, but for GLBT news publications as well.
We have seen five regional community papers come and
go since ou; inception, most only in publication for a few
months. Weil, this month is our 3rd Anniversary issue. With
the beginning of our fourth year January 2007, we plan to
make some changes, add new features and continue to
bring you our readers, local, national and world news that
affects the GLBT community. A new feature in this issue is
our "AFTER DARK" calendar which list events and special
function announcements from our advertisers. A good reason
to keep the STAR on your coffee table all month.
The Star was launched in December 2003 in Joplin, Missouri.
Our first issue was a digest size black and white
GLBT news and information magazine of just twelve pages.
Our first printing was under 1000 copies and distributed to
Joplin, Springfield, Fayetteville and Tulsa. Needless to say,
the Ozarks STAR had a very meager beginning with just
three advertisers.
I have worked very hard the past 3 years to make this
magazine a vlabie source of community information, news
and entertainment. Our readers are traveling the region to
places that were unknown when we began. I have personally
made many wonderful new friendships and acquaintances
because of this magazine. You are sincerely appreciated.
A big KUDOS to the efforts of our contributing writers Donald
Pile. RayWilliams, Michael Hinzman, Paul Wortman,
John Patrick, Greg Gatewood, Victor Gorin, Josh Aterovls,
Steve Urie and many others who have kept us informed
and entertained. Also to our sales agents Michael Leach,
Victor Gorin, Devre Jackson and Kay Massey who have
contributed tremendousiy to our success. Last but not least
a big thank you to our advertisers and readers.
WE'VE COME A LONG WAN BABY!
Sincerely,
C. D. Ward
Publisher/Editor in Chief
'tlvv-...,.ozarksstar.com
Dear Chaz:
We notice that your publication, (The Star) is approaching its
3rd Anniversary and we are very proud of you. You have brought to
the Midwest a very intelligent and professional gay publicarion that
is now one of the main gay/lesbian publication in the tv1idwest.
Long are the days when so many gay pubiications were merely
"sleaze rags" Your content, articles and columns keeps everyone
abreast about events in the state, the Midwest, the country and the
world!
As we travel around the country, we always take extra copies of
the STAR with us to show other gays and they are amazed at the
quality of your publication.
Congratulations on your 3rd Anniversary and we wish you
continued success with your splendid work for many, many years to
come. We are very honored to be a small part of your success.
Respecdul!y,
Donald Piie
Ray Williams
.',<,<\',:·,,,'\/;,, ·. I.lei us help!
(91 ) - 6
the STAR 3
4 the STAR
Victor Gorin interview with newly
elected 2nd term Oklahoma County
Commisioner Jim Roth.
Election 2006 By Joe Solmonese. HRC
President. Solmonese examines the effects
of the 2006 election on the GLBT
community.
litfi HOLIDAY GIFT IDEA'S
We did some shopping for you!
Something unique, something cheap
and some bling.
Travelers "Savannah, GA"
0 of Town "Fort Lauderdale"
Uncle Mikey finds a Twink that wants
co be fabulous, while a queen ponders
the afterlife.
INDEX
An Interview with Jim Roth ..... 6
Book Review. . . . . . . . . . . ... 11
OUT in Arkansas ........... 12
Past Out. ................. 14
Tulsa GLBT Centei News ..... 15
Holiday Gift Idea's. . . . ... 16
Ciao Travel. . . . ........... 17
Lesbian Notions. . . . . . 22
Star Scene. . . . . . ..... 24
Uncle Mikey. . . .. 26
After Dark . . . . .. 27
Horoscopes.. . .......... 28
Distributors. . . . 29
Cartoons. . . . . . . ...... 30
Classifieds. . 31
STAR DISTRIBUTION:
Jolie Justice in Lesbian Notions
"Christmas in November''- page 22
Progressive Church Shakes Up
Norhwest Arkansas. - page 12
-~•,!!,.~.!';'!~.-.
History of gay motorcycle clubs in
~~pi\ST ()lIT~~ - page 14
OKLAHOMA C!TY .. TULSA"' LAV'/TON ~ t-.,lCA.lESTER ~ EiHD • UTTLE ROCK" NORTH LITTLE ROOK.,
FAYETTEVILLE i' FT SMITH " EUREKA SPRINGS • HOT SPRINGS * BENTONVILLE ~ ROGERS ~ KANSAS
CITY~ SPRlNGF!ELD ",JOPUN " BRA~JSON AREA:!, VVlCHlTA,.. PiTTSBURG • JUNCTION CITY
\/'.f'vvvv.ozarksstar.corn

AN INTERVIEW WITH
OKLAHOMA COUNTY
COMMISSIONERJIM ROTH.
By Victor Gorin
Phoro: Left Viaor Gorin and Jim Roth
In 2002, Jim Roth ran againsr anti-gay incumbent Beverly Hodges
in the race for Oklahoma County Commissioner of District One,
and become Oklahoma's first op~nly gay county commissioner. . He
made the most of rhis opportunity to do an excellent job in this position,
winning the respect of Oklahoma County voters from many
walks oflife. This year his Republican opponent, Dave Mehlhaff,
waged one of the most single issue, anti gay campaigns ever, and yet
Jim was re-elected. Now he shares with us how ir's been, and the
vision he has for che future
Victor: Well Commissioner, you ran a very strong and imeresting
campaign that always looked successful, but did you still feel a sense
of relief when it was over?
Jim: Absolutely. You never know until the last vote is counted. \ve
felt confident, we worked hard, but we didn't want to take anything
for granted.
Victor: Wdl, I'm sure you feel much better now. What do you feel
were the major factors.~hat made your victory so resounding?
Jim: Two things--First and foremost was our job performance. We
worked very hard and deiivered on what we promised, anci I don't
chink anyone has ever done better in District 1.
Second, my opponent's bigotry was rejected by a great number of
people that I think arc tired of that mean spirited side of politic;. l
think people realized from his approach rhat he had lirde to offer.
1/ictor: Truly over the past 4 years, v.rhen one considers the duties of
v;hat a county cotnn1issioner is supposed to do, you have a record
you can be proud of, including a balanced budget.
Jim: 1hat's right. Although all 3 discricts of ()kiahon1a (~ounty get
tht: sa1ne a111ount of n1oney for roads, I have the 1nf)St road n1ileage
6 the STAR
and still was the only one wirh a baianced budget. The pubiic in my
district is now driving over 54 miles of new road and 8 new bridges
with safer conditions. !vfy predecessor, Beverly Hodges, only built 1
bridge during her term.
Victor: You were instrumental during 2004 in impiementing and
keeping, despite a repeai attempt, a poiicy of nondiscrimination
for Oklahoma County employees that indudes sexual orientation.
Even now iI is the only government protection pertaining to sexual
orientation in the state of Oklahoma.
Jim: I serve this office with the premise char all peopie deserve respect
and dignity, and a public employment simation, of all places,
should be free of discrimination of any kind. We changed the current
policy to expand coverage in 3 areas, physical disabiliry, political
affiliation, and sexual orientation. I worked w implement this
policy for 3 reasons, to protect taxpayers from liability from officials
doing stupid things, attracting talent, and because it's the right thing
to do.
Victor: What do you hope do accomplish during your next term?
Our district is on a great rrajectory of improvement with a very aggressive
road and bridge program, a number of major projecrs. We
are also bringing a focus to senior citizens issues. Vie have to be sure
that we are that safety net so that their golden years are truly that.
Also I want to work on issues co help our memally ill in this county
so that they aren'r kept in the county jail without treatment.
Victor: Do you have future aspirations after .:his term of office?
Jim: Not right now, bur maybe in future years rhere will be something
I'll feel challenged w try.
Victor: \V'e!l, you obviousiy won the confidence of the voters in
Oklahoma County. Besr wishes and looking forward to four more
years! *
Two Night Tulsa Event Benefit
For Tulsa Cares Food Pantry.
By Greg Steele
TULSA, OK_Billed as Tulsa's Social Event of rhe year, the Bamboo
Lounge staged a two night benefit show hosted by Kris Kohl. The
5th annual Miss Bamboo Pageant was held on Saturday November
18th and the following night with Kris Kohl's show, The Bamboo
& Faces Present "REMEMBER OUR FAMILY". The two night
extravaganza packed the nighrc'.ub both nights and raised do;;:: ro
$500.00 for the Food Pantry.
The Miss Bamboo Pageant histed by Terry Hood and Stan Smith
dub co-owners is only one event out of 111any that the couple stage
each vear to benefit non-profit organizations in the Tiilsa area. 'The
out g~ing ~1iss Ba1nboo 2006. Mona Lott n:iuctandy reiinquishcd
her crown to Miss Bamboo 2007, Holly Rose, a newcomer to the
scene. Holly Rose campaigned extensiv~!y v.lith her slogan "!es
'Time For l1 l'~c",,v Generationn and sources say her ,veaithy husband
donated quite a sun1 to her success. lvfona Lott, J\.-1:iss Bamboo 2006
in a rage l~Jf despair crov,rned herself "E1npress of the Ban1boo'1 \Vhich
amounrs to nothing bur a cheap ploy to 1nainrain royal sratus in her
aging state! P.._ great time vva.s had by all and for a very gcJod cause.
Photo on page 25.
v1v,.;•.v,ozarksstar.com 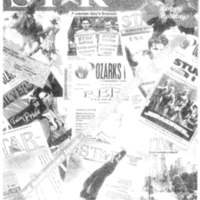