THE PREMIER SO,URCE FOR GLBT OKLAHOMA
VOLUME 7 ISSUE 6 Twi~er,com/MetroStarNews ® MetroStarNews,com JUNE 1, 2010
Coast to Coast, Border to Borde,; fi’om Enid, Oklahoma Cil)
"Simply Proud" the eme ofOklahoma City
Pride Parade t val° this year
By Victor Gorin
Contributing wrker
OKLAHObvL& CITY. OK Oldahoma
Ci@ Pride Festival and Parade is coming
together again this year a’; always, uniting the
GLBT communi~" of the OKC metroplex
and their friends for a }Sbulons weekend of
tim, fellowship, and fi_~r some fond reflection.
Going with it all this year are the Pride
Banners of Cimarron ~Nliance, which will fly
fi’om Oldahoma City lampposts of Classen
Boulevard fi’om June 8 to July 8 to highlight
the festivities.
It all begins with a Block Party
Friday June 25 on the N.W. 39th Street
Strip (beginning at NT~ 39th Street &
Pennsylvania Avenue), this time beginning at
8 a.m. and lasting until 4 p.m.
The Festival itself will take place again this
year in Memorial Park, located at N.W. 36th
& Classen Boulevard, opening on Saturday
June 26 at 10 a.m. and dosing at 10 p.m.
It will reopen the next day on Sunday June
27 at 10 a.m., closing down at 3 p.m. as the
Parade lineup begins. N~e festival will
feature a varietT of live entertainment, events,
vendors, and informational booths.
The Pride Parade will step off that Sunday
at 5 p.m. at Memorial Park, concluding
with the Grand Finale over the Hill past
Peunsylvania through the N.W. 39th Street
Strip. For 2010 this event was renamed the
Paul Thompson Memorial OKC Pride Parade
to honor his memory as one of Oklalaoma’s
most renowned activists for GLBT equality
and human rights in general. Mr.~-hompson
had also served for many years as the Male
Co-Chair ofOKC Pride, and had passed
away March 4 of this year.
The Festival and Parade commemorates
Gay Pride Week, which marks the Stonewall
Riots of 1969. Itwas June 28 of that year
when patrons of the Stonewall Inn, a gay bar
in New York City, fought baek against the
police after enduring endless harassment. This
was an event unprecedented in American
history where the police were forced to
barricade themselves in the very bar they
came to raid, and the rioting that followed
changed America forever. Straight people
were forced to deal with a gay community
that would no longer accept discrimination,
and the GLBT community was awakened to
........Continued See OKC PRIDE Page-8
Rev Lavanhar took long path to Tulsa Pride Grand
Marshal
By Michael W. Sasser
Contributing gZriter
Reverend Marlin Lavanba~ Pressphoto
TULSA, OK__ Although Reverend
Marlin Lavanhar was surprised and honored
to be named Grand Marshal ofJune’s Tulsa
Pride Parade and Festival, he has his sights set
beyond on a larger objective.
"For me it will be especially worthwhile if
the role allows me the platform to speak on
for the inclusion of all people, regardless of
orientation," said Lavanhar, senior pastor at
All Souls Unitarian Church in Tulsa.
Lavanhar has been a high-profile advocate
for the GLBT community in a state notably
light on supporters from the clergy for many
years. He has been a tireless supporter of
the local community during his 10 years at
All Souls and has made the inclusion of the
GLBT world key to his ministry.
"I realized early on that this wotdd be the
major civil rights issue over tl~e era of my
ministry," Lavanhar said.
Stil!, l,avanhar’s most recent high profile
effort was a rislo! one even for a clergyman
with a long history of championing human
rights. Just months ago, Lavanhar accepted
an invitation to speak at a conference in
Uganda that was a rallying point against
efforts by that African nation to approve
capital punishment as the sentence for
homosexuality.
"We have a sister church in Uganda
and my colleague there was the conference
organizer," Lavanhar said. "The purpose is to
build grassroots resistance to the anti-GLBT
bil!. They asked me to speak. Honestly I had
to think about it."
There was real danger for the conference
organizers and those who attended.
........Continued See LAVANHAR Page-8
: 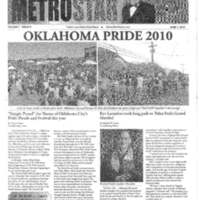