~’m p~oud of the
Stonewall Democrats on my 234th Birthday!
"We are at a moment now when liberalism is poised to have
its biggest impact since Roosevelt, because the conservative
movement has been thoroughly repudiated through reality."
"What mailers, as always, is not what we can’t do,
~ it,s what we can and must do."
Stonewall Democrats is a recognized group of the
Oklahoma and national Democratic Par~.
Working to educate voters and politicians about issues of the
comr~uni~y, we are working to make change and shape
NEXT MEETING iS TUESDAY JULY 6, 7:00 We meet the 7st Tuesday ofevery month at the
k~OMA STATE DEMOCRATIC PARTY kIEADQUART 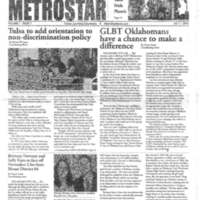