ESTABLISHED 2003 www.ozarksstar.com APRIL 2008
"The homosexual agenda is destroying this nation." "1 honestly think it’s the biggest threat our
nation has, even more so than terrorism or Islam. They have infiltrated City Councils. They are
after your 2 year olds for indoctrination." State Representative, District 84, Sally Kern.
Compiled by Star staff
Photo: Rally at Memorial Park Oklahoma City.
¯hese sentiments expressed by State Representative
Sally Kern were taped at a Republican
gathering who had invited her to speak
on what some term the homosexual agenda.
The tape was given to the Victory Fund,
a national gay & lesbian political activist
group and placed on ¥outube, where it has
now been heard by over 1,000,000 people.
It has garnered international attention with
responses that have overwhelmed Youtube,
and to say that the lines of communication
with Ms. Kern were jammed would be a
classic understatement. Ellen Degeneres was
not surprised when she tried to contact Sally
Kern after playing the youtube video on
her show and couldn’t even leave a message.
Although the audience was obviously not in
agreement with Sally, Ellen appealed to Miss
Kern on the air, stating that she wanted to
talk to her, that she obviously had some
misinformation.
Although some responses received by Ms
Kern were supportive, the vast majority were
not, and many were threatening and are
being investigated by the Oklahoma State
Bureau of Investigation.
At a Press Conference at the Church of the
Open Arms March 11, Cimarron Alliance
President Richard Ogden, among many others,
denounced Ms. Kern’s remarks and stated
that she should apologize or be censured
by the Oklahoma House of Representatives.
As he put it, "These are hateful words that
can result in hateful actions, This is about
accountability, not freedom of expression."
It was pointed out that only 3 months
earlier, Stephen Domer of Oklahoma City
was murdered because he was gay. So far
Ms. Kern has refused to apologize and the
Speaker of the House, Republican Chris
Benge ofTulsa, has stated he will not call for
Ms. Kern to be censured. However Governor
Brad Henry stated that he advised her to
"Think before you speak. Oklahomans have
love and tolerance for all people. I don’t
think this rhetoric represents Oklahoma."
P-Flag of Oklahoma has asked for a meeting
with her, but has gotten no response.
Her statement that the gay community
was a bigger threat than terrorism or Islam
drew fire from both military personnel and
Oklahoma’s Muslim community. At the
Church press conference Richard Ogden
pointed out that one of the four people on
United Airlines Flight 93 who overpowered
the hijackers who were heading the airliner
to the White House, Mark Bingham, was
gay. Another speaker at the conference, Jerre
B. Fine, a Air Force veteran, stated that
she was honored to serve her country and
that Sally Kern’s comments that gays were
a bigger threat than terrorism or Islam, and
were a cancer in the toe of society were very
hurtful on a personal level. She pointed
out that "I served my country dutifully and
honorably for 6 years of my life. We need
protection not only from outside forces
trying to destroy America, but also we need
protection from within from people like
Sally Kern."
On March 14 there was a rally at Memorial
Park featuring signs along Classen Boulevard
encouraging rush hour travelers to
honk to show opposition to Representative
Kern’s remarks. The event got extensive television
coverage, and featured many community
leaders. Most important of all was that
the responses from OKC’s commuters were
overwhelmingly supportive.
In a recent Tulsa World poll, the question
was: Would you sign the petition to have
Sally Kern removed from office?
..............Continued PAGE 5 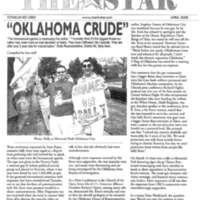