Tulsa Family News was a monthly newspaper; No. 1 issued between December 1993-January 1994.

The newspaper brings up important, evolving topics of marriage, military, law, charity, Pride, TOHR, HIV/AIDs, events, advice and politics all at the local and national level. 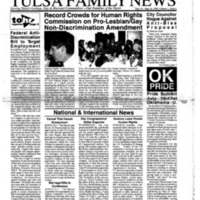