Lynn Riggs, Oklahoma's premier playwright, wrote most of his 25 full-length plays about his home state - stories of the people he knew in this childhood as they struggled to create new lives in a changing culture . Son of a part-Cherokee mother and pioneer father in Claremore , Lynn wished to introduce the public t the diverse people of the Plains Many of Riggs' early poems, The Iron Dish 1930, evoked the ambiance of Santa Fe, his favorite city. Later, more personal poems, This Book, This Hill, These People, 1982, often reflected a Native American view of life. His interests were in singing, playing guitar, and acting.
After high school, as a young man with identity issues, Riggs signed on as a cattle puncher on a train bound for Chicago. then went to New York , where he played an extra in some early cowboy movies being filmed in the Bronx. By 1920, he was in Hollywood, working as a film extra. Between film jobs, as he read proof for the Los Angeles Times, a disaster brought him a windfall .


In 1928, Riggs' talents earned him a Guggenheim Fellowship to work for a year in Franc e. It freed him from money worries and gave him peace to write his most famous play, Green Grow the Lilacs. The Theatre Guild produced it on Broadway in 1931, featur­ing many of the old folk songs from Lynn's childhood that he loved. The same group revived it on Broadway in 1943, substituting contemporary music by Richard Rodgers and Oscar Hammerstein and the new title, Oklahoma!. It broke all records and continues to be produced across the U.S. and around the world.

He continued to write all his years, and to encourage aspiring writers. He supported amateur theatre groups wherever he could believing that they would shape the future of American theatre . He died of lung cancer in New York in 1954. 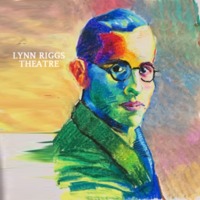