Charles Faudree was an important part of the design team who helped bring about Oklahomans for Equality Dennis R. Neill Equality Center dedicated in Tulsa in 2007. Charles passed away in 2013. The information below is from his obituary.

Charles Hamlet Faudree was born February 27, 1938 in Ada, OK to Ruby May (Brewer) and Hamlet Charles Faudree. He passed from this life Wednesday, November 27, 2013 at the age of 75. Charles attended St. Joseph's High School in Muskogee, OK and graduated from Northeastern State College in Tahlequah, OK with a Bachelor's of Arts degree in Art Education. He was gifted beyond measure in the field of interior design and was adored around the globe for his attention to detail, his blending of myriad blues and his abject love of all things French. Charles was honored by House Beautiful as one of the top designers in the United States and was the best-selling author of six books on interior design. His fabric and wallpaper lines marketed through Stroheim and his work covered by Veranda, House Beautiful, Southern Accents and Traditional Home among others, Charles leaves an indelible legacy in the field of interior design. A believer in strong community support, he touched the lives of countless Tulsans as the founder of The Hope Candlelight Tour, a passionate supporter of Tulsa CARES, an avid follower and advocate of AA and an enthusiastic parishioner of Parish Church of St. Jerome, ECC and, as well, a bell ringer at Christmas for the Salvation Army.

Charles, throughout his life possessed an irrepressible sense of humor and quick wit, was an ardent prankster with a laugh that could light up a room and he collected friends from every walk of life and from every corner of the world. A humble man, generous of spirit beyond measure, caring more about others than self, he loved and lived life to the fullest extent possible and considered himself extraordinarily blessed to have had the support and love of a small and treasured family, the adoration and companionship of a cadre of Cavalier King Charles Spaniels, and the loyalty and admiration of an extraordinary number of friends and acquaintances - all of whom considered themselves equally blessed to have called him friend. 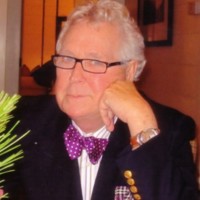