On March 19, 1976, Mr. John Faires, of the Tulsa Gay Community Caucus, appeared before the city's Board of Commissioners to speak on the matter of gay civil rights. Mr. Faires said "on behalf of the gay population of Tulsa (we) respectfully ask that the Tulsa City Commission adopt a Municipal Ordinance which will guarantee the rights of all homosexuals in this municipality so that fear and repression will no longer enslave the minds of one of the largest minorities in this community. As we look back to the past, we find it hard to understand the hatred and injustice which affected other minorities within the country. Why should a person be forced into a role of second or third class citizenship because of his color, religion or economic standing? In the same way, how can any rational, educated person Justify oppression and hatred of a person because his natural orientation allows that person to love an 1ndiv1dual of his own sex. Gentlemen, we ask for no special treatment. What we do ask ls equality - Just as other minorities have been guaranteed their Just rights, those of Jobs, housing, public accommodations, it still remains out of reach of the open or 'suspected' homosexual, .
The Board of Commissioners in a four to one vote moved to refer the matter to the Community Relations Commission for investigation and report.
On April 19, 1976, Mr. Faires appeared before the Community Relations Commission (CRC). The CRC voted to conduct a detailed study to determine whether or not an ordinance should be recommended to the City Commission. It was suggested that the investigation be in conjunction with the Tulsa Gay Community Caucus and should gather concrete data that would be useful to CRC, the City Commission and the public at large, The motion passed unanimously.

Prepared and Written by Victoria A. Meyers 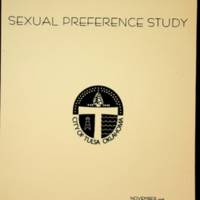