*MP4 video available to researchers for on-site viewing only due to copyright. Location:OkEq History Project/Ddatadrive/History-General (in Omeka)/2005Jan12NightlineMichaelShackelford*

A small conservative town in Oklahoma confronts the issue of gay rights as one of its own evokes the wrath of an outside hate group.

Michael Shackelford loves his truck. And he loves Merle Haggard. Not unusual for an 18-year-old in Sand Springs, Okla. But Michael still stands out from the crowd -
- because he is gay. In the "Buckle of the Bible Belt," that's still a big deal. Michael's mother desperately wants him to change, because she knows If he doesn't, they won't end up in heaven together. Michael's pastor has made It his mission to "make Michael see the truth" about homosexuality: that it is a sin and he must change in order to inherit the Kingdom of God. And Michael's peers at his high school have been none too kind. They called him faggot and queer. He avoided going to the bathroom all day long for fear of being cornered and beaten.

Then Anne Hull of the Washington Post came to town. Her stunning 3-part series on Michael ran during the height of the political season last fall when the issues of gay marriage and gay rights were on the front burner. For Michael and his mother, seeing their lives laid out before them in the Post was therapeutic - they realized that their struggles were not unique. Few people in Sand Springs read the Washington Post, so the series garnered scant attention locally.

It did, however, catch the eye of the Rev. Fred Phelps at Westboro Baptist Church in Topeka, Kan. Phelps runs a Web site called godhatesfags.com. He makes it his business to humiliate gays wherever he finds them. He and his group picketed the funeral of Matthew Shepard, the gay teen murdered six years ago in Laramie, Wyo. They picketed in San Francisco during the gay marriage blitz. And now they announced their intention to picket Michael's church in Sand Springs because his pastor had failed to cast him from the flock.

Fliers from Phelps began appearing on fax machines all over Sand Springs. "God hates Michael Shackelford," they read. "God is not mocked God Hates Fags & Fag Enablers!" The faxes were like a bomb being dropped in the middle of town. The community felt under siege. Fear, anger and apprehension blanketed the town. Suddenly the topic no one cared to talk about could not be avoided.

What transpired was remarkable and surprising, not least to Michael Shackelford.
We hope you'll tune in to Nightline tonight to see the outcome of one town's struggle with God, gays and bigotry.

*available to be viewed with permission at the Dennis R. Neill Equality Center 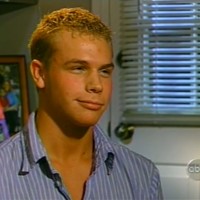